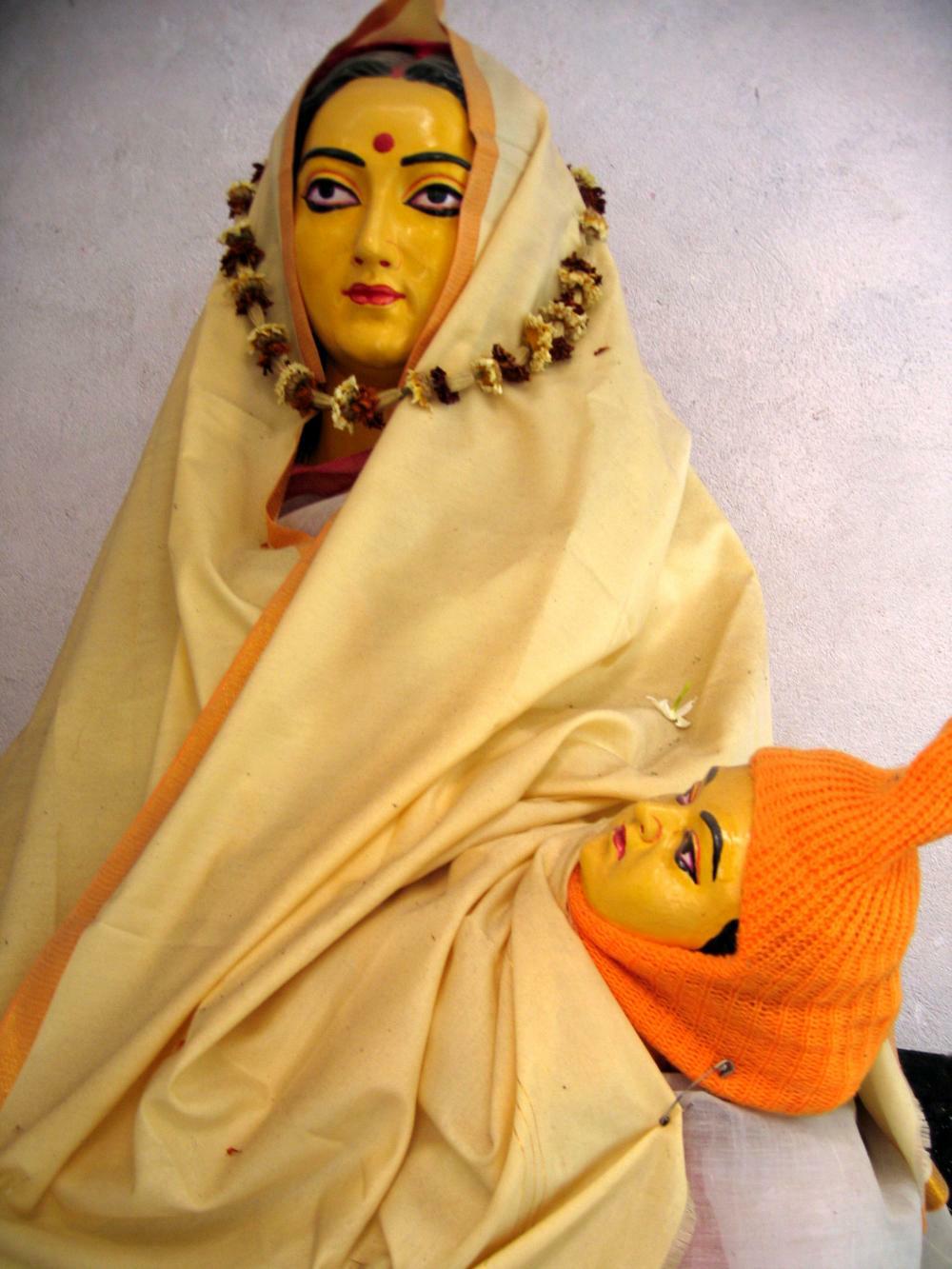 The third member of the catur-vyuha, Pradyumna, took part in Radha Madhava’s lila in Vraja as Krishna’s intimate friend or priya-narma-sakha. He has now appeared as Raghunandan, whose body is not different from that of Chaitanya. (Gaura-ganoddesa-dipika 70)

RAGHUNANDAN’S FATHER, MUKUNDA DAS
Raghunandan was born into a family of physicians6 in the Shaka year 1432 (1510 AD). His father’s name was Mukunda Das, his mother’s name is unknown. Mukunda Das was Narahari Sarkar Thakur’s older brother. In the fifteenth chapter of the Madhya-lila of Chaitanya Charitamrita, it is clearly said that Mukunda Das was physician to the king.
Externally, he appears to be a physician to the king who is engaged in government service. But internally, he is filled with divine love. Who would be able to know his love? (Chaitanya Charitamrita 2.15.120)
Once when Mukunda Das was engaged in treating the king, he saw a peacock feather and fainted. This incident is also described in the Chaitanya Charitamrita (2.15.121ff). His home was in Srikhanda, a village in Burdwan district. On the Katwa-Burdwan rail line, the first station west of Katwa is Sripat Srikhanda, and the second Srikhanda. Mukunda Das’s home is about one mile from the Srikhanda station. Raghunandan Thakur took birth on the Vasanta Panchami day. His uncle Narahari took a great deal of interest in raising Raghunandan, for whom he had much affection. Chaitanya Mahaprabhu indicated that one’s importance increases with the depth of devotion by telling Mukunda Das that his son was really his father.
The three most important devotees from Srikhanda were Mukunda Das, Raghunandan and Narahari. Mahaprabhu asked Mukunda Das, “Are you Raghunandan’s father and he, your son? Or, is he your father and you his son? Tell me so that I can put my doubts to rest.” Mukunda answered, “Raghunandan is my father and I am his son, rest assured. Whatever devotion we have comes from him, therefore I see him as my father.” When he heard Mukunda Das’s answer, Mahaprabhu was thrilled and he said, “He from whom we imbibe devotion is certainly our guru.” (Chaitanya Charitamrita 2.15.112-117)

MAHAPRABHU GAVE RAGHUNANDAN THE SERVICE OF DEITY WORSHIP.
Raghunandan’s work is to serve Krishna. He has no interest in anything other than serving Krishna. (Chaitanya Charitamrita 2.15.131)
From his early childhood, Raghunandan Thakur would feed the family’s Gopinath deity laddus. Uddhava Das has written a song in which this lila is described:
Mukunda Das lived in the village of Srikhanda, where his household deity was named Gopinath. One day he had to go somewhere for work and he called Raghunandan to do the service.
He said, “In this house we worship Krishna, so I want you to be sure to give him something to eat.” and then he left. Raghunandan did as his father had ordered and made the offering to the deity.
Raghunandan was just a child and in his simplicity, he said to Gopinath, “Eat! Eat!” Krishna is controlled by love, and so he did as the child told him and ate everything on the plate without leaving a grain of rice.
When Mukunda Das returned, he asked the boy to bring him the prasad from the offering he had made. The child answered, “Father, he ate everything and left no remnants.” Mukunda was astonished at his child’s wonderful words that he asked him again on another occasion to make an offering. This time after he left the house, he returned and hid to watch what his son would do.
Raghunandan joyfully placed a laòòu in Krishna’s hand and said in a commanding voice, “Eat! Eat!”. When Krishna had eaten half of the laddu, Raghunandan saw Mukunda Das in the doorway.
Mukunda saw that Krishna did not take another bite and that the half-eaten laddu remained in his hand. This caused him to be filled with love. He embraced his child and, as tears of joy rained from his eyes, spoke to him in a broken voice.
To this day, fortunate people come to Srikhanda to see the half-eaten laddu in Gopinath’s hand. Raghunandan is not different from Cupid himself, says Uddhava Das with great feeling.
[All the mahantas] felt fascinated to see the Gopinath deity whom Raghunandan had fed laddus. (Bhakti-ratnakara 9.525)

OTHER MIRACULOUS EVENTS
Narahari Sarkar Thakur gave mead to Nityananda Prabhu and Mahaprabhu from a pond which was right next to the their home. This pond became known as Madhu Pushkarini. The legend is told that a kadamba tree which grew right next to the pond always had two flowers blooming regardless of the season by Raghunandan’s miraculous powers. According to the Gaudiya Vaisnava Abhidhana, another miraculous event took place in Raghunandan’s life: One day Abhirama Thakur came to Srikhanda and paid his obeisances to Raghunandan. Then he embraced him and melted with feelings of prema. Raghunandan started to dance and sing kirtan, and while doing so, one of his ankle bells slipped from his foot and went flying off, landing four miles away in Akai Hat near his disciple Krishna Das’s house. Later, in order to commemorate the event, a tank was excavated there which was given the name Nupur Kund.
Mahaprabhu, the father of sankirtan, gave his adopted son Raghunandan Thakur the authority to offer the garland on the day before the sankirtan yajna (the adhivasa) and to make the final offering at the yajna’s end.
Raghunandan Thakur accompanied the Bengali devotees to Puri ever year at cäturmäsya. He would dance with his uncle Narahari at the Rathayatra festival in the group formed by the residents of Srikhanda.
He participated in the Kheturi festival organized by Narottama Das Thakur, at Gadadhara Das’s festival in Katwa and at the commemorative festival for Narahari Sarkar Thakur in Srikhanda.
Some people said, “Anyone who is dear to Raghunandan will win Mahaprabhu’s mercy for life after life.” Others said, “Raghunandan is so merciful that he gives life to the most humble and fallen.” Some said, “What humility! There is no one who is his equal.” And others, “He is as beautiful as Kandarpa himself!”, etc. (Bhakti-ratnäkara 9.660 ff.)
Srila Raghunandan Thakur had great affection for Srinivas Acharya. Prior to his disappearance he consoled Srinivas that despite the difficult times, he would be able to spread Vaishnavism in the future:
“A difficult time is coming in which people will succumb to various doubts. Narahari Prabhu wrote in his sri-Krsna-bhajanamrta:
krsna-caitanya-candrena nityanandena samhrte |
avatare kalav asmin vaisnavah sarva eva hi ||
bhaviñyanti sadodvignah kale kale dine dine |
prayah sandigdha-hrdaya uttametara-madhyamah || (verses 3-4)

Once our Lord Krishna Chaitanya and his companion Nityananda Prabhu have ended their incarnation, the Vaishnavas in this age of Kali will be anxious with every passing day. Whether very advanced, somewhat advanced or neophyte, their hearts will nearly always be filled with doubt.
But don’t let this worry you. Lord Gauranga will accomplish many great works through you. I bless you that you remain long on this earth and that you and your followers protect our Lord’s religion. Those who are opposed to devotion to Krishna will become devotees by your influence and they will take shelter of you. (Bhakti-ratnakara 13.174-179)
Raghunandan Thakur bequeathed the service of his Gaura-Gopal deity to his son Kanai Thakur and then left this world on the fourth day of the waxing moon in the month of Shravan. Kanai Thakur gave a feast as a part of his father’s last rites:
Raghunandan slowly became hidden to mortal eyes while repeating again and again the names of Sri Krishna Chaitanya. How glorious is that day of Shravan Sukla caturthi! Who will not sing the glories of Raghunandan Thakur? (Bhakti-ratnakara 13.183-4)