The Significance of the Worship of Sri Krishna 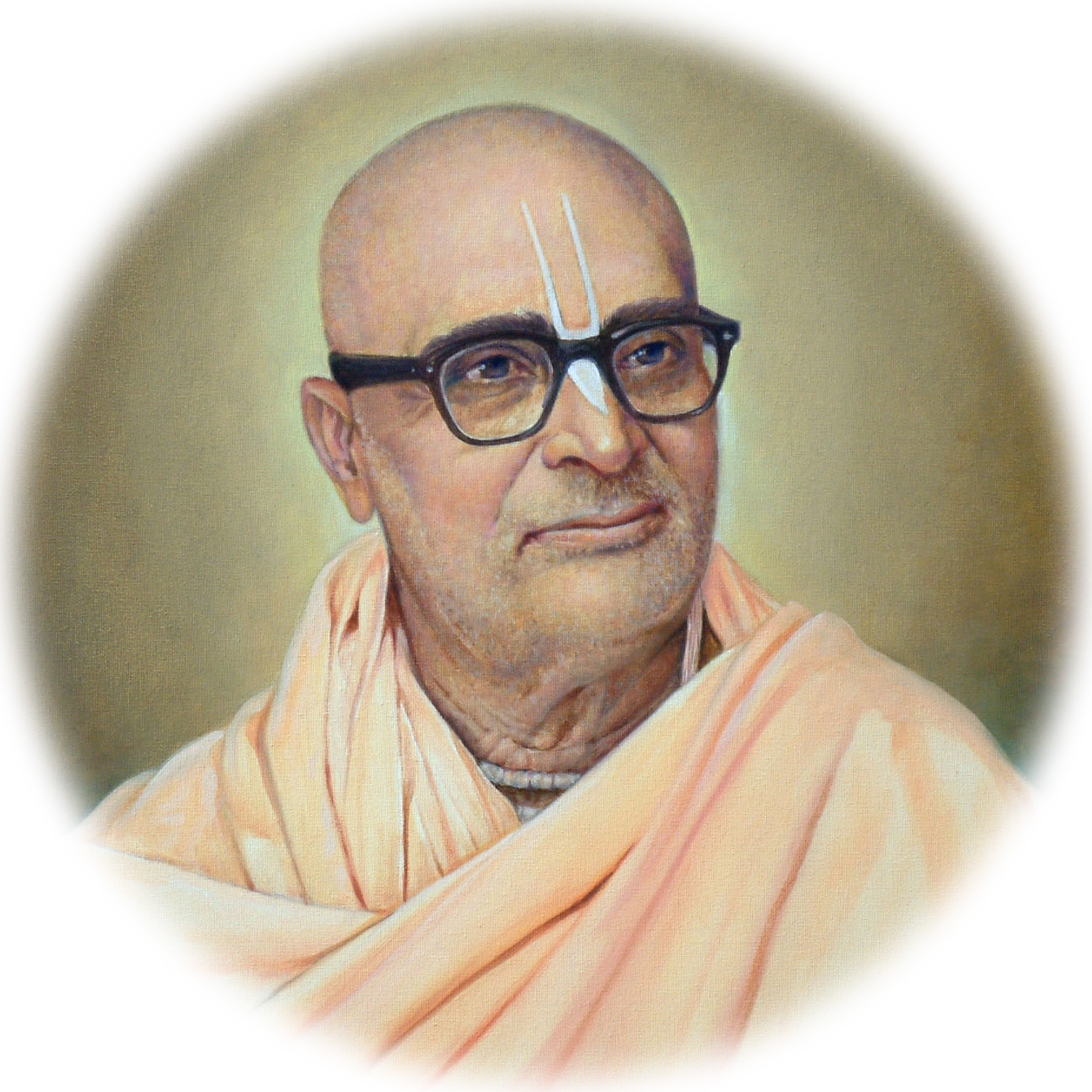 “The word Krishna is composed of the root kṛṣ meaning bhu, the shelter of all existence, and the word na, meaning nirvṛti or the form of supreme bliss. Combined, they form the word Krishna which signifies Param Brahman, the Supreme Absolute Truth.”

The word Krishna means “self-existing bliss.” The Vedanta has defined this as anandam brahma, and:

“He is that rasa (ananda or bliss). One who drinks that rasa becomes full of bliss.”

In another sense, the word Krishna means kṛṣ: “to attract” (karṣane) and na: “giving bliss.” The one who attracts all and gives them bliss, and who is blissful Himself, is known as Krishna. In other words, Krishna means “all-attractive” and “all-bliss-giving.” He cannot be all-attractive without being super-excellent in every respect. When He exhibits His aspect of being smaller than the smallest, Krishna is known as Paramatma. When He exhibits His aspect of being greater than the greatest, He is known as Brahman. Then again, reconciling both His anu (microcosmic) and vibhu (macrocosmic) natures and accepting a medium-sized Form, Sri Krishna performs wonderful pastimes of infinite variegatedness.

Knowers of the truth call that non-dual, absolute knowledge tattva—the Absolute Truth. This non-dual knowledge is referred to by the words Brahman, Paramatma or Bhagavan. The word Brahman signifies the largest (bṛhattva); Paramatma, the smallest (anutva); and Bhagavan, the all-opulent (sarvaisvaryamayatva: possessing all riches, all strength, all fame, all beauty, all knowledge and all renunciation). In other words, it encompasses the largest, the smallest, the middle, and everything else in existence. The word Bhagavan reveals all the different aspects of the Absolute Truth. The jñani experiences that non-dual tattva as Brahman, the yogi realises Him as Paramatma, and the bhakta sees Him as Bhagavan. Bhagavan manifests infinite pastimes in infinite Forms, among which Sri Krishna is His original Form (svayam-rūpa).

Sri Krishna is the origin (avatari) of all other avataras (divine descents). He is Bhagavan Himself.

Due to His (Krishna’s) divinity, others are divine. In the Brahma-samhita (5.1), Krishna is described as being the Cause of all causes—the Supreme Lord:

Sri Krishna Chaitanya Mahaprabhu has also described Nandanandana Sri Krishna as being the highest object of worship. All possible needs of the living entity can be completely fulfilled only by the worship of Sri Nandanandana Krishna. How, then, will we be able to understand all these words? So long as we maintain an air of prejudice, this same prejudice will blur our vision. One has to be worthy of understanding the science of the Absolute (bhagavat-tattva); unless one acquires that qualification, despite having considerable mundane worthiness, realisation of Bhagavan will not be possible. If we are not willing to work to reach that level, we should not expect to acquire that privilege. We cannot know Him through arrogance because He is Unchallengeable Truth. He has no cause, and there is no one equal to Him, what to speak of greater than Him. Therefore, except for the grace of Bhagavan, there is no other method of knowing Him. To know Bhagavan, there are certain conditions that must be met. Surrender yourself with all humility. Be inquisitive, in a reverential manner, about all that is spiritual. Serve, with an attitude of surrender, the spiritual master who has knowledge of the spiritual. Srimad Bhagavad-gita (4.34) has offered this instruction:

The Devotee and Bhagavan

One who possesses all majesty or wealth, all potency or strength, all fame, all beauty, all knowledge and all renunciation is known as Bhagavan. The fact that Bhagavan possesses all beauty implies that He is beautiful; therefore, he must possess form. However, in saying that He must possess form, we should not attempt to confine Him by the perishable limits of length, breadth and height. The internal potency (cit-sakti) of Bhagavan has as its reflection the material energy, which is subject to change and destruction. We must not attribute those faults to that which is being reflected, i.e., Bhagavan, Who has a transcendental spiritual Form. To do so would be foolish. Actually, Ultimate Existence is beyond the power of human intellect. The reflection has no real existence to speak of, but if the reflection gives the appearance of reality, then we must understand it to be a shadow reality—an unreal reality! Since a shadow is not real, we should not expect to derive true knowledge of reality from it. The srutis say:

Bhagavan does not have limbs, yet He accepts and moves. He can see without eyes, He can hear without ears, etc. The meaning of these apparently contradictory statements is that Bhagavan does not have a material form like ours, which is made up of material elements. On the contrary, He has a transcendental spiritual Form. In truth, because Govinda, the Cause of all causes, possesses form, we see so many forms in the universe. Without there being form in the cause, there can be no form in the effect; without there being form in the source, there can be no form in the reflection. Logically, something cannot come from nothing.

“Krishna is the nondual Absolute Truth, the Supreme Personality of Godhead. Although He is one, He maintains different personal expansions and energies for His pastimes.”

The svarūpa-sakti (cit-sakti) has three divisions: (1) sandhini, by which existence is preserved; (2) samvit, by which everything is known or perceived; and (3) hladini, by which activity and bliss is generated. Sri Baladeva is the principle of existence (sandhini-sakti). Sri Krishna is the Consciousness Who enables awareness of our own existence (samvit-sakti). Sri Radhika is hladini-sakti or the pleasure-giving potency. The sakti that brings the greatest joy to Sri Krishna is the essence of all that is bliss, and is the very form of maha-bhava (the highest stage of Divine Love). She is the daughter of Vṛṣabhanu—Srimati Radhika. Sri Nanda Maharaja and Srimati Yasoda-mata, who serve in parental mellow (vatsalya-rasa), are the best among devotees because they too give supreme joy to Sri Krishna. Today is the Ānandotsava, the festival of joy of Sri Nanda Maharaja. With his grace, we may also be blessed with the grace of Sri Krishna.

“Those who are afraid of material existence may worship the sruti, smṛti or Mahabharata, but I pay my obeisances to Nanda Maharaja because Sri Krishna, the Param Brahman, becomes trapped by the love of Sri Nanda and crawls around as a baby in his courtyard.”

“Maharaja Parikṣit asked, ‘What pious merits did Nanda Maharaja accumulate by which Sri Krishna came to him as his son? What are Yasoda’s past merits? She, too, is fortunate that the Supreme Lord Sri Krishna called her “Mother” and drank her breast milk.’”

Once, Lord Brahma abducted the cows and cowherd boys of Vṛndavana to test Krishna. However, as a result, he found himself deluded by Krishna’s mystic potency. Realising his folly, Brahma then took absolute shelter of the Lotus Feet of Sri Krishna. Showering adorations, Brahma praised the cowherd damsels (gopis) of Vraja and their great fortune—their prema or unalloyed love for Sri Krishna.

“There are no limits to the good fortune of Nanda Maharaja and the residents of Vraja. The personification of bliss, the eternal, Supreme Brahman, has manifested Himself as their dear friend.”

Getting the Grace of Sri Bhagavan

Since Bhagavan is beyond the confines of our limited intellect, we cannot know Him by virtue of our own merit alone. If that were so, then the very logic of Sri Bhagavan being the all-opulent Supreme Lord, Omnipotent and Infinite, becomes negated. The only way of knowing Bhagavan is by the desire of Bhagavan Himself. To act according to the desire of Bhagavan is to have priti (affection), or bhakti. If we act according to Bhagavan’s desire or, in other words, if we follow the course laid down by Bhagavan in the srutis and smṛtis, then this will be the very means of achieving the grace of Bhagavan. That being said, how are we to know those rules laid down in the scriptures that are dear to Bhagavan? The answer to this is, we must seek the company of devotees and take shelter of a pure devotee.

There are two types of bhakti—vaidhi-bhakti and raganuga-bhakti. The first is the trodden path of scriptural rules and regulations, and the second is the blazing fire of transcendental love and passion. Sri Krishna can only be caught by raganuga-bhakti. Thus, sang one devotee:

“Those who are afraid of material existence may worship the sruti, smṛti or Mahabharata, but I sing praises to Nanda Maharaja, in whose courtyard plays the Param Brahman, Sri Krishna.”

Nanda Maharaja and Mother Yasoda have trapped the Infinite with their pure love. If I could even reach the doors of such a devotee, would there then be any doubt that I would definitely have darsana of Bhagavan? There are two aspects that I will carefully endeavour to enable you to understand. The devotee of Bhagavan always desires to please Bhagavan. If anyone else tries to please Bhagavan, then the devotee becomes that person’s slave. Then again, Bhagavan wants the devotee to be happy. If one loves the devotee, then Bhagavan becomes captured by that person. That is why those who love and serve Bhagavan’s devotee can easily win the blessings of Bhagavan’s grace. Remember the saying, “If you love me, love my dog.” It is not difficult to love Bhagavan. Knowledge, wealth, beauty, power, etc., are not required in this love.

“Those who are intoxicated with their birth (social status), wealth, learning and beauty are incapable of uttering the Name of Krishna, which can be taken by those who are bereft of all material assets.”

If all the pride in the world should occupy all the space in my heart, if I expend all my energies to chase after wealth, sex and power, then how can Sri Bhagavan find a place in such as my heart? Although a welcome sign hangs at the gate, the inside is cluttered up with so much rubbish that the invited guest has to turn away, being unable to find a place to sit. In like manner, it is no use to externally extend a welcome to Bhagavan if the inside is clogged up with unwanted desires. Bhagavan may very well come, but He will go away without finding a place to sit.

From the lectures of Srila Param Gurudev