When Srila Jiva Goswami was a little boy, he refused to play any game that had no relation to Kṛṣṇa, with other boys. He made images of Kṛṣṇa and Balaram and would worship Them with flowers and sandalwood paste and dress and decorate them. He would gaze upon them with unblinking eyes, sitting motionless on the floor like a golden doll. When he paid obeisance to the deities, his eyes filled with tears. He would offer their Lordships sweets and then take the prasad and distribute it to his friends. 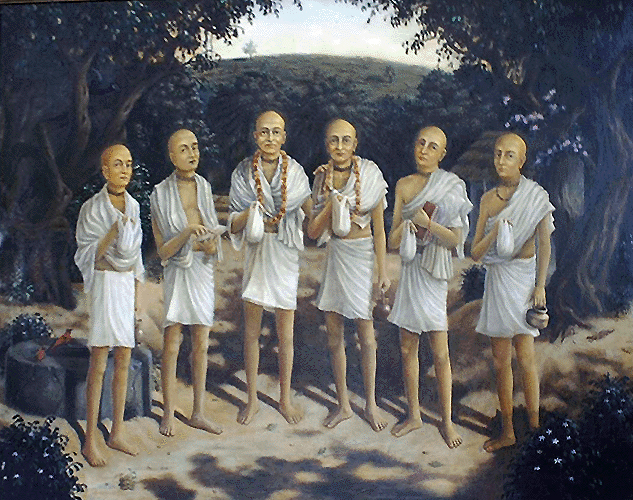 According to the Gaura-gaṇoddeśa-dīpikā (195), Śrīla Jiva Gosvāmī was previously Vilāsa Manjari in Vraja. In verse 203 of the same book, it is stated that he was the son of Vallabha and a scholar of exemplary character (suśīlaḥ paṇḍitaḥ śrīmān jīvaḥ śrī-vallabhātmajaḥ). According to the Gauḍīya Vaiṣṇava Abhidhāna, Jiva was present in this world from 1511 to 1596 (1433 to 1518 Śaka), but some other sources propose that Jiva lived from 1533 to 1618.

Jiva Goswami’s Early Life
Śrīla Jiva Gosvāmī appeared in the village of Ramakeli in the district of Maldah as the son of Anupam Mallik (Vallabha) who had made his residence there in order to serve in the government. The name of Jiva Gosvāmī’s mother is not known. Narahari Chakravarti in his Bhakti-ratnākara (1.540568) has given Jiva Gosvāmī’s genealogy going back seven generations. This list, as explained by Śrīla Bhakti Siddhānta Sarasvatī Gosvāmī Ṭhākura has been given here in this volume in the chapter on Śrīla Rupa Gosvāmī. Jiva Gosvāmī’s father’s original name was Vallabha, but Mahāprabhu gave him the name Anupam. (Chaitanya Charitamrita 2.19.36)

Mahāprabhu met Anupam for the first time when He came to Ramakeli. By His will, Rupa Gosvāmī and Sanatan Gosvāmī abandoned all of their worldly duties and then set off in an effort to be reunited with Mahāprabhu in Vrindavan. The same spirit of renunciation took hold in Jiva Gosvāmī’s heart at this time also, as has been vividly described by Narahari in Bhakti-ratnākara as follows:

Sri Jiva’s mind became distracted from the time that his two uncles went to Vrindavan. He abandoned his jewels and fine dress, comfortable bed, food and various amusements. It was as though nothing interested him any more. He could not bear hearing news of political and other mundane affairs. (Bhakti-ratnākara 1.686-8)

Narahari Chakravarti summarizes Jiva Gosvāmī’s early life story as follows: In a dream, Jiva Gosvāmī had a vision of Mahāprabhu dancing in the midst of sankirtan. He was overwhelmed by feelings of divine love and soon thereafter left his home. He had some companions who went with him as far as Fateyabad from Bakla Chandradwip, but from there he continued alone to Nabadvīpa. There he met Nityananda Prabhu in the home of Srivas Pandit and received His blessings. Nityananda Prabhu told him at that time that he should go to Vrindavan:

With fatherly affection, Nityananda Prabhu touched Sri Jiva’s head with His feet. He showed incomparable mercy toward Sri Jiva, lifting him from the ground and embracing him tightly. Transported by divine ecstasy, Nityananda Prabhu said, “I rushed here from Khardaha for your sake alone.” He said other things like this to pacify Sri Jiva and then made Srivas Pandit and the other devotees give their blessings to him. After keeping Sri Jiva there for some time with Him, Nityananda Prabhu sent him off to the North. He said, “Hurry off now to Vraja. That is the place the Lord has given over to your family.” (Bhakti-ratnākara 1.765-9, 772) 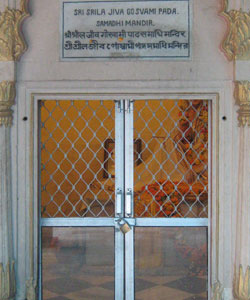 It is not clear whether Jiva Gosvāmī ever met Mahāprabhu directly. However, there is a hint in the Bhakti-ratnākara that Jiva Gosvāmī was a baby when the Lord came to Ramakeli. Jiva Gosvāmī demonstrated an interest in devotion to the Supreme Lord from his early childhood. Even when playing with his friends, he was only interested in games that were connected to the worship of Kṛṣṇa.

When Sri Jiva was a little boy, he refused to play any game that had no relation to Kṛṣṇa, with other boys. He made images of Kṛṣṇa and Balaram and would worship Them with flowers and sandalwood paste and dress and decorate them. He would gaze upon them with unblinking eyes, sitting motionless on the floor like a golden doll. When he paid obeisance to the deities, his eyes filled with tears. He would offer their Lordships sweets and then take the prasad and distribute it to his friends. (Bhakti-ratnākara 1.719-23)

Jiva Goswami Goes to Vraja
By Nityananda Prabhu’s grace, Jiva Gosvāmī was able to visit all the sacred sites in Nabadvīpa Dham. After completing his tour of the dham, he travelled to Benares where he studied all the scriptures with Madhusudan Vachaspati. Then he went on to Vrindavan where he remained under the tutelage of Rupa and Sanatan Goswamis.

Śrīla Bhakti Siddhānta Sarasvatī Gosvāmī Ṭhākura Prabhupad has given the following summary of Jiva Gosvāmī’s life in his Anubhāṣya to the Chaitanya Charitamrita: “After the disappearance of Rupa Gosvāmī and Sanatan Gosvāmī, Jiva Gosvāmī was established as the topmost teacher of the Gaudiya Vaiṣṇavas of Orissa, Bengal and Mathura provinces. He engaged everyone in the worship of Kṛṣṇa through teaching the truths given by Mahāprabhu Himself. He would occasionally perform Vraja Dham parikrama with the other devotees and sometimes would go to visit Vitthalnath in Mathura.

“Kṛṣṇa Das Kaviraj Gosvāmī wrote the Chaitanya Charitamrita during Jiva Gosvāmī’s lifetime. Not long thereafter, when Srinivas, Narottam and Dukhi Kṛṣṇa Das came from Bengal, he gave them the titles Acharya, Ṭhākura and Shyamananda, respectively. He then sent them back to Bengal with all the scriptures that had been written by the Goswamis, with instructions to preach the religion of the Holy Names and love of Kṛṣṇa. He received the news of the loss of the scriptures and later of their retrieval. He later gave the title Kaviraj to both Ramachandra Sen and his brother Govinda. Jahnava Devi and other devotees came to Vrindavan during his lifetime. Whenever Bengali devotees came to Vraja, he arranged for prasad and lodgings during their stay.”
(Anubhāṣya 1.10.85)

The loss of the scriptures refered to in the above paragraph took place when agents of the king Bir Hambir of Vana Viṣṇupur stole them. Later, when the king heard Srinivas Acharya speak on Śrīmad-Bhāgavatam, he was converted to Vaiṣṇavism and took initiation from him. Srinivas Acharya thus recovered the books. All this is described in full in this volume in the chapter of Srinivas Acharya.

Jiva’s Writings and Controversies
In the Bhakti-ratnākara, a list of twenty-five works ascribed to Jiva Gosvāmī has been given:

Śrīla Bhakti Siddhānta Sarasvatī Gosvāmī Ṭhākura Prabhupad has given the following warning in his Anubhāṣya to those inexperienced persons who might be deprived of Kṛṣṇa-prema through the influence of ignorant and offensive Sahajiya teachings: “Three slanderous ideas about Jiva Gosvāmī are current amongst the ignorant Prakrita Sahajiyas. Anyone influenced by these calumnies, which are fundamentally inimical to Kṛṣṇa, the guru and the Vaiṣṇavas, will become increasingly offensive and end up losing his taste for service to the Supreme Lord.

“(1) It is said that a certain dig-vijayi scholar, eager to amass mundane prestige, came to Rupa Gosvāmī and Sanatan Gosvāmī to get their signature as an admission of defeat in debate. Jiva Gosvāmī’s gurus conceded defeat without any argument and the arrogant scholar proclaimed them to be nothing more than ignorant fools. He then asked Jiva Gosvāmī also to sign such an admission of defeat. Jiva Gosvāmī, however, decided to take on the puffed-up Brahmin in debate in order to silence his scurrilous tongue. In this way, he preserved the integrity of his spiritual master’s reputation and demonstrated the ideal behavior of one who is guru-devatātmā, (one who recognizes his spiritual master to be his worshipable deity and source of life). Some ignorant Sahajiyas, however, say that Śrī Jiva’s behavior went contrary to Mahāprabhu’s teaching of being humbler than a blade of grass and of giving respect to others. Indeed, they say that Rupa Gosvāmī chastised Jiva Gosvāmī for this very reason and ostracized him for some time, and only when Sanatan Gosvāmī interceded on Jiva Gosvāmī’s behalf did he accept him again into his association.

“Only when these enemies of the spiritual master and the Vaiṣṇavas receive Kṛṣṇa’s mercy and begin to see themselves as their eternal servant, will they also receive Śrī Jiva Prabhu’s blessings and be able to understand what it really means to be ‘humbler than a blade of grass’ and ‘a giver of respect to all’. Only then will they be eligible to chant the Holy Names in the proper way.

“(2) Some other foolish Sahajiyas say that when Jiva Gosvāmī first read the Chaitanya Charitamrita with its clear and brilliant explanation of the divine devotional sentiments of Vraja, he was afraid that it would hamper his own scholarly reputation. He therefore threw the manuscript down a well in a spirit of mean-mindedness. Upon hearing of this, Kṛṣṇa Das Kaviraj Gosvāmī was greatly shocked and immediately gave up his body. Fortunately, Kaviraj Gosvāmī’s disciple Mukunda had made a copy of the original manuscript and thus it was preserved and later published far and wide. Had Mukunda not done so, the Chaitanya Charitamrita would have been lost forever.

This is another contemptible bit of invention based on an inimical attitude to the guru and Vaiṣṇava. It has no basis in reality and there is no possibility of its being true.

“(3) According to other sense-obsessed fornicators, Śrīla Jiva Gosvāmī should not be accepted as an authority because, in his treatises, he did not accept Rupa Gosvāmī’s pārakīyā-vāda idea, but rather supported the svakīya-vāda. They say that he cannot be accepted as a rasika-bhakta, or a devotee who is knowledgeable in the divine sentiments.

“The fact is that during Jiva Gosvāmī’s lifetime, some of his followers demonstrated a preference for the svakīyā-vāda. Jiva Gosvāmī recognized their limitations and so, for their benefit and for the benefit of those in the future who would be unable to comprehend the transcendental nature of the pārakīyā-rasa and would themselves take up adulterous relationships in imitation of Kṛṣṇa, he gave credence to the svakīyā doctrine. This is a sign of his acting appropriately as an acharya. One should not take this as evidence of his being opposed to the transcendental pārakīyā-rasa, however, for he is the topmost of Rupa Gosvāmī’s followers and one of Kṛṣṇa Das Kaviraj Gosvāmī’s spiritual teachers.”
(Anubhāṣya, 1.10.85)

Rupa Goswami’s Mercy to Sri Jiva Prabhu
Narahari Chakravarti has shown how Rupa Gosvāmī instructed Jiva Gosvāmī, punished him and then blessed him, in a story told in the fifth wave of Bhakti-ratnākara:

From book Sri Chaitanya and His Associates by Srila Gurudev